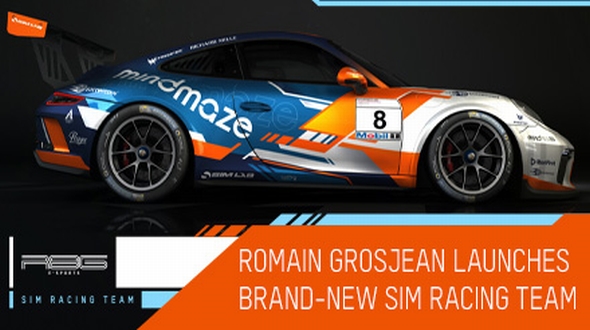 French Formula One driver Romain Grosjean recently unveiled his sim racing team: R8G Sim Racing Team that will compete across various platforms. This new team, supported by a number of partners including Acer, is aiming to become a major force in online racing.

Romain Grosjean’s interest for eSports is not new. The professional driver has been tracking its development for some time and has become a big fan of sim racing because of its accessibility and the quality of driving talent that has emerged across the world. “Launching my own sim racing team is a proud moment because I’m passionate about motorsport, innovation and embracing new challenges. I think the team structure we have created is unique and will be instrumental in helping us to achieve the ambitious target we have set”, said Romain Grosjean, who has entered 164 Grands Prix.

A link between the virtual and real words

R8G Sim Racing Team, built with the support of Monaco based Triple A eSports, is supported by a pool of partners that will help it bid to bridge the gap between the virtual and real racing worlds by, for instance, giving its driving and, in time, other talented sim racers, real-world motor experience. Thanks to its partnership with Braga Karts, the team drivers will have the opportunity to test with the Praga factory team and might go forward to enter the X30 World Championship event at Le Mans (France). “We’ve all seen the driver talent that is emerging from sim racing and it’s impressive. Our goal is to reward and try to develop this driver that have the potential to race for real. That’s an exciting prospect for everyone involved with the R8G Sim Racing Team”, Romain Grosjean added in a release.

Acer’s Predator will supply gaming hardware and equipment to the team’s drivers. “We decided to enter sim racing competition to get closer to this new gamers’ public, but also to the car racing world. Virtual races offer a very strong brand-experience. They allow us to communicate on our new gaming technologies towards continuously growing eSports fans audiences. We are happy to have the opportunity to support Romain Grosjean in creating a world-class sim racing team”, said Hajo Bligen, Vice President Marketing, Acer Europe. MindMaze, the neurosciences company that is developing brain technology for driver performance tracking, will also support the team during its forthcoming sim racing campaign, which is also sponsored by other brands including Richard Mille, iBanFirts, digital currency Network SoccerCoin, SimLab and Go-Pro.