NBA makes a move towards sports betting with NBABet Stream 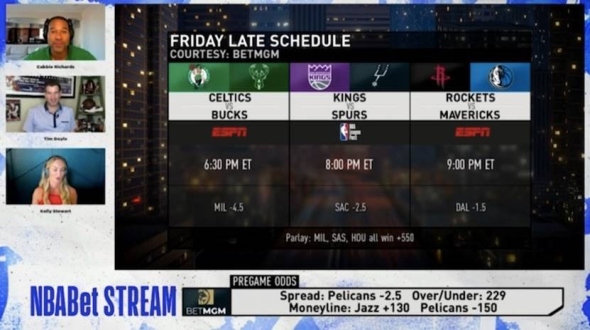 The National Basketball Association (NBA) announced earlier this week the launch of NBABet Stream, a new alternate sports betting focused broadcast presented by SportMGM available of NBA TV and NBA League Pass for the NBA restart via the NBA App and NBA.com through the NBA’s direct-to-consumer subscription product.

Launched for the Oklahoma City Thunder vs Denver Nuggets game which is part of the NBA restart schedule, NBABet Stream features “overlays displaying point spreads and odds, as well as betting analysis”. With this move which is the latest step in the NBA’s approach of the sports betting world in the United States, the league is attempting “to create a new experience for viewers, including different cameras angles that would not be accessible with fans in the arena, as well as some virtual elements”, as ESP explained in an article, adding that “thanks to a partnership with Microsoft, more than 300 fans each game appear live on 17-foot tall video boards surrounding the court”.

The NBA was the first major North American sports league to partner with a sportsbook operator back in 2018 by teaming up with MGM Resorts shortly after the U.S. Supreme Court struck down the “Professional and Amateur Sports Protection Act of 1992” with used to restrict regulated sports to the Stade of Nevada. BetMGM's sportsbook will provide the odds for the betting broadcasts.