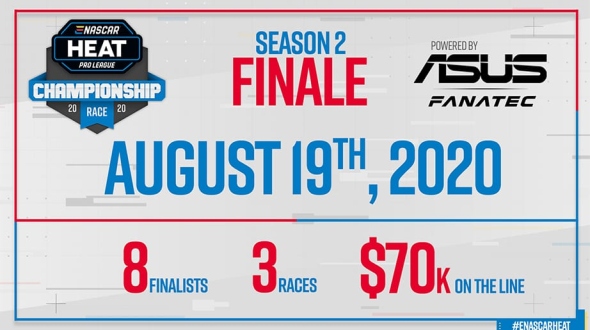 The eNASCAR Heat Pro League e(eNHPL) Season 2, which will conclude on August 19th with a total of $70,000 on the line in the Championship Finale for the competitors, with the ultimate driver champion taking home $30,000, has signed two new partners: ASUS and Fanatec.

Originally planned to be held as live event, the eNHPL Championship Finale will be held online because of the Coronavirus health crisis, with all of the drivers racing on the PC version of the newly release NASCAR Heat 5, the video game officially licensed by NASCAR. It’s the first time in series history that all drivers will be competing on the same platform in the same race. The eNHPL Championship Finale will be broadcast live online via motorsport.tv, the NASCAR Heat Facebook and Twitch accounts, eNASCAR.com, as well as taped delayed on MAVTV in the USA and on REV TV in Canada.

ASUS, which has been named official gaming hardware of eNASCAR, will provide each of the drivers with ASUS ROG Strix G15CK PC, ASUS ROG Strix PG248 monitor and ASUS ROG Strix GO 2.4 headset for the championship showdown. “The eNASCAR Heat Pro League is leading the charge in bringing an unparalleled eSports experience to race fans and motorsports professionals alike in this thrilling conclusion of the championship series. As the official gaming hardware partner for eNASCAR, ASUS is excited to expand its longstanding gaming legacy by supporting passionate racing fans, talent and dedicated eSports communities with the tools they need to compete at their best and win”, said Gary Key, Senior Director of Marketing at ASUS.

The drivers will also be using the Fanatec ClubSport Steering Wheel, officially licensed by NASCAR, which elevates the driving experience to the next level with its realistic 350 mm diameter. "The eNASCAR Heat Pro League has shown us that no matter what is going on in the world, competitive racing can still continue and prosper. We’re proud to work with Motorsport Games and their community of NASCAR fans, bringing one of the most intense racing series to the global esports stage, culminating in the Championship Finale race later this month. Fanatec will continue to support the series with our NASCAR-licensed products for many years to come”, said Thomas Jackermeier, CEO of Fanatec. “The eNASCAR Heat Pro League, a collaboration between Motorsport Games, the Race Teams Alliance and NASCAR, gives esports racers the chance to drive for one of 14 official eNHPL teams”, he added.